Zhanjiang (John) Liu, Professor of Biology in the College of Arts and Sciences and Vice Chancellor for International Strategy, was inducted into National Institute of Food and Agriculture (Neva) hall of fame As the winner of the organization’s award for the year 2022.

He cites recognition of an individual’s contributions to that organization and work in support of it US Department of Agriculture (US Department of Agriculture) strategic goals, including commitment to the country’s food, agriculture, natural resources, and humanities projects. Volunteers are recognized for their extended research, educational and career efforts NIFA’s mission To invest and advance agricultural research, education and extension to meet societal challenges. 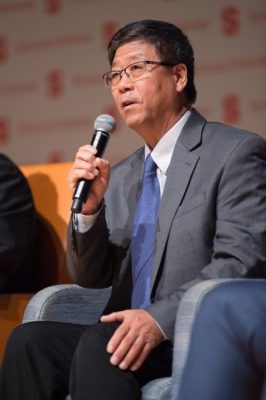 In addition to his outstanding research contributions, Leo Honored by NIFA for nearly 20 years of service as Aquaculture Coordinator for the National Research Support Project. In this role, he coordinated aquaculture genome research involving more than 400 scientists worldwide.

Over the past 30 years, Liu’s research into aquaculture genomes and bioinformatics has provided important information and technical support for the catfish industry in the United States. It includes creation of the first ‘all fish’ expression vector, catfish genetic and physical mapping, whole genome sequencing and assembly, decoding of catfish and blue catfish genomes, and discoveries of genes important for growth, heat stress, reduced oxygen tolerance and disease resistance. These genes and associated markers allow selection of genetic stocks for the catfish industry.

Liu says he feels humbled and honored with this prestigious award. “It represents the pinnacle of my career as an educator and researcher. It means a lot to me on a personal and professional level, and is like a bullet in the arms. It makes me want to work more effectively and efficiently to bring back the many benefits I received from my time at the University of Minnesota, Auburn University and Syracuse University.”

Liu says he is especially grateful for the opportunities to advance research at Syracuse University in areas related to the social challenges of food, health, energy, the environment, climate change, water and other natural resources. Among his years of efforts, he is most proud of his work educating and training students, he says, since he earned his Ph.D. Students are now professors in the United States and in many other countries.

Liu joined Syracuse University as vice president for research in 2017 and later became interim vice chancellor and president. He was appointed to his current position at the university in June 2022.

He has guided many of the university’s commitments to diversity, equity, inclusion, and accessibility, including the Future Professors Postdoctoral Fellowship program. The first year seminar and the creation of a team interaction with student activity. As Vice President for Research, he conceptualized and developed the Cluster Recruitment Program to enhance interdisciplinary collaboration. As Dean, he has led the expansion of the program into 10 key areas in which the university’s research can lead the way in solving pressing problems.

He came to Syracuse from Auburn University, where he spent 22 years as a faculty member in the College of Fisheries, Aquaculture and Aquatic Sciences. He also served as associate dean of the College of Agriculture and co-director of the Alabama Agricultural Experiment Station, and then associate dean and associate vice president for research at Auburn. He was a founding member of the Cell and Molecular Biosciences Program at Auburn and served as Director of the Aquatic Genomics Unit for many years. Liu also provided leadership in the development of aquaculture genetics as part of the USDA’s National Animal Genome Program, and served on a committee that developed a blueprint for the national animal genome, genetics and breeding programs.

Liu says NIFA’s work advancing agricultural research and education is an important endeavour. Agricultural research and education addresses the core issues of global challenges in food security, food safety, poverty and social justice, human nutrition and health, energy and the environment, and climate change. Liu says that solving these challenges will enhance the quality of life for all people. “Research in these areas is now more important than ever in providing solutions to global challenges, and I am especially grateful to Auburn University for its more than two decades of research and leadership in those areas.”