In this Presidents Cup, a picture of those who are gone and not forgotten

Quill Hollow, NC – You were supposed to see Davis Love III standing there in the wake of the Ryder Cup last fall, smiling like a gambler who knows the fix is ​​in. As the heir to a profound wealth of talent, his only job was to assure everyone of what was to come next.

Loew said that afternoon, standing outside the media tent as the US team presented to a post-tour news conference, where some were walking around with their arm on their teammate’s shoulder.

It’s hard, in hindsight, to describe the feeling That Sunday afternoon at Whistling Straits. An American team that started the week compared to the underperforming Ryder Cup teams that preceded it, answered with the final meter. Euro team shocked. Run it off the track. Make it all a joke.

Then that American team assembled for a laugh-filled celebration, drenched in champagne. Enjoy self-satisfaction. Set baptisms along the east coast of Wisconsin. We told you so.

It was a moment with all the peculiarities of a new beginning. This is how it was discussed, and how it was written about. Behold the boundless future of American professional golf! No team in recent Ryder Cup history has scored 19 points. None of them won by 10 points. The American team did both. Not only that, but more importantly, the entire group seemed fiercely united in doing so. Even Brooks Koepka and Bryson DeChambeau put aside their mutual disdain for a half hug.

Love, the assistant captain of the American team, was about to inherit a freight train.

Perhaps some of the rising young American talent will find a few places in the Presidents Cup squad, but overall, this Ryder Cup roster provided a picture of the post-Tiger Woods world of international play. Jordan Spieth, Justin Thomas, Patrick Cantlay, Xander Shaveli, Colin Morikawa and DeChambeau were all under 30, all won at least one match and used the kind of talent that can only be disrupted by injury or an unwise swing change.

As Koepka said, “It’s more fun than years ago. It’s a tight-knit group of guys. Everyone is a little younger, everyone has known each other for over 15 years, it seems.”

One year later, golf, as a whole, became unknown. On a professional level, the sport has evolved into a charred landscape of professional professional leagues vying for a fort. it’s the PGA Tour versus LIV. It’s tradition and power versus money and ambition. It’s a DP World Tour trying really hard to figure out what the hell to do next. The fans are stuck in the middle – those who hate LIV, those who love LIV, those who totally check it out. Money is the center of every conversation.

The game is in shambles, and this week will provide a first-hand view of the implications. 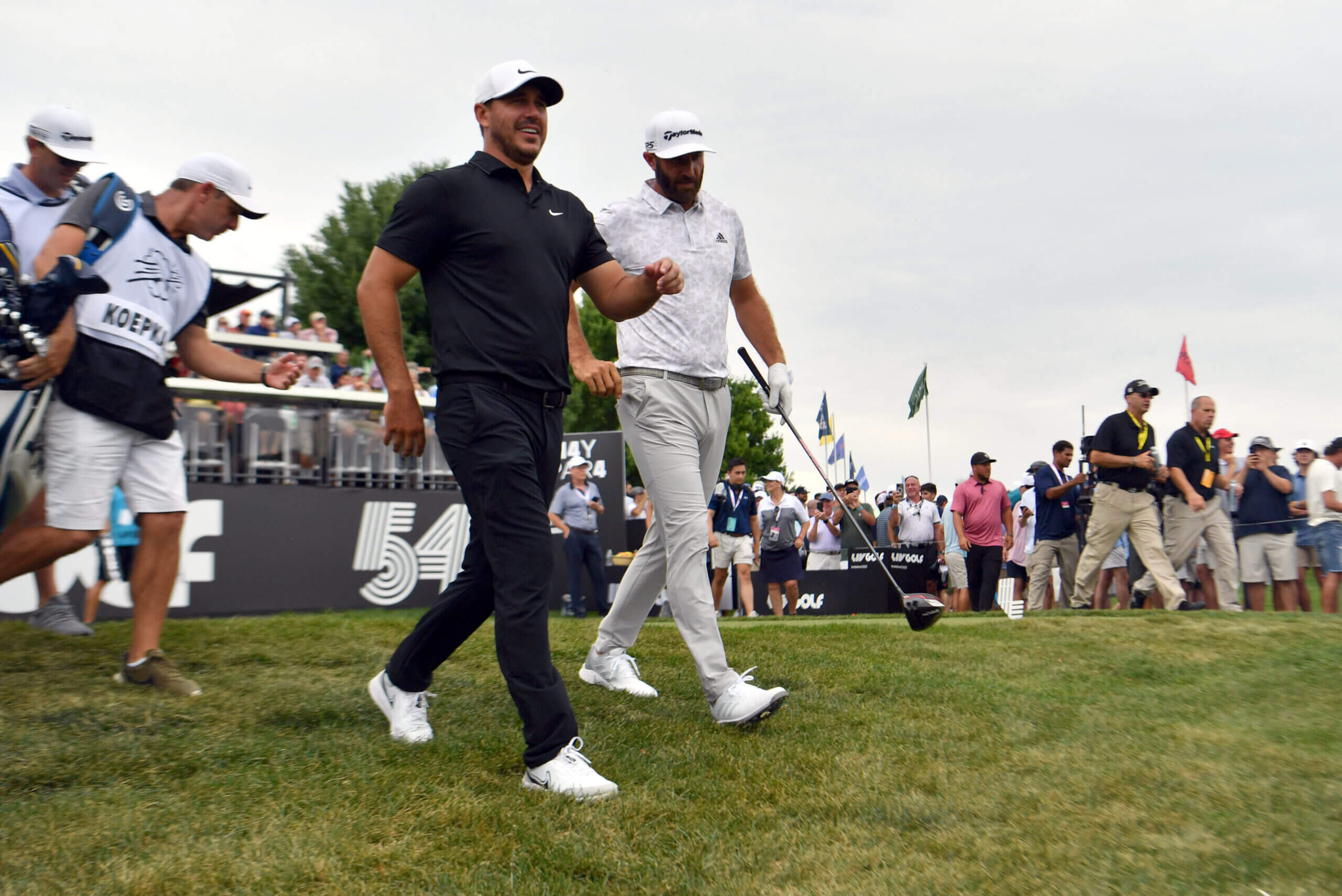 Brooks Koepka, left, and Dustin Johnson chose to join LIV Golf rather than continue to be champions on the American team. (Jonathan Jones/USA Today)

This American team will have to act like Dustin Johnson, Champion 5-0-0 Ryder Cup last fall, does not exist. She’ll have to go about her business as if it was only natural that Phil Mickelson wouldn’t be with her as co-leader. DeChambeau, who we thought fixed his Whistling Straits image, said last week he “couldn’t be happier” to play with LIV. Koepka, who last year bragged about how important international play was to him and said the media misunderstood his intentions, is also gone. Would DeChambeau or Koepka have made this Presidents Cup team despite their recent struggles and injuries? we do not know. But we know the point is moot. They are not invited.

There are others. Taylor Gotsch could be his first appearance in the Presidents Cup this week. He is clearly one of the top 20 players in the world. Don’t bother with it, though.

And don’t get me started on the weak international team. Cameron Smith, Joaquin Neiman, Louis Oosthuizen, Mark Leishman and Anirban Lahiri. All m – an undesirable character. Let’s act as if they don’t exist.

The question is, will the event be any different? Will this week at Quail Hollow feel cheated, faked, or forced?

Because if it does, it will be a preview of what could be in the future: a world where big business and the Ryder Cup are played into an abyss of reality.

in conversation with the athlete Earlier this summer, Love was asked: If the international competition doesn’t make it to our top 12 versus our top 12, is that really true?

“No, it is not,” he said. “Look, the Presidents Cup is going to be huge and exciting and fun. But is he really going to be a Top 12 versus a Top 12? Unclear. But that guy No. 14 that was moved to 11 or whoever is still a really good player. And they’re going to give the cup. And the guys will be on the team. winner.”

Stop and think about it.

“Hey, in the Super Bowl, do the two best teams always make it? Probably not. There are other good teams.”

The difference, as love teaches, all NFL The team has a chance at the start of the season to get there.

This is no longer the case in golf. Not now at least.

“Look, a year from now, when we get ready for the Ryder Cup, it’s going to be a different scene somehow,” Love said. “If the LIV wins and our business goes down and the top players aren’t allowed to play, then yes, the Ryder Cup goes down as well. If it gets to that point, they are going to have to invent something.”

The factions of that American team now stand in direct confrontation. The future eligibility of players competing in the President’s Cup and eventually the Ryder Cup may be up to the courts to decide. But is this how anyone would want to build these teams? The judge can decide whether players are allowed to compete, but he cannot delegate camaraderie.

Justin Thomas started the Ryder Cup last year by saying, “I’m going to war with those other 11 guys.”

Maybe that wasn’t what he meant.

The good news for the American side is that this year the US team is still very young (average age: 28.8) and absurdly talented (average world ranking: 11.6). Reporters such as Scotty Scheffler, Tony Fino, Spieth, Thomas, Cantlay, Shaveli and Morikawa lingered. Cam Young, Max Homa, and Sam Burns all join the party, making this group look even stronger, which is ridiculous. These players can and will continue to represent a united front. They can still pump out the high-five and grip pump and spray some Moet come Sunday. Billy Horschel and Kevin Kesner would treat this like the Super Bowl.

But we all know the dominant idea that will survive. DJ must be there with his buddies. Mickelson should be on the green side of the golf cart with the headset on. The two combined to participate in 34 iterations of the Presidents Cup and Ryder Cup.

The other stigma that stains the sun in Charlotte? This international team plays with a half surface. It’s a ridiculous feeling to treat this as Manu Manu.

The hope is that it’s still a great week at Quail Hollow. Huge crowds to be expected. The weather looks beautiful. Lots of stars still play. All those good things.

But there will be that annoying sound in the back of the head. He’ll be wondering if we should all just quietly give in to the fact that the luster of international multiplayer is set to deteriorate rapidly, and this week is anything but the front page. If the story continues with these events about who does not play, you will lose the battle. This week, for the Americans, only Johnson was a touching absence from the squad. But the international team is decimated, and there is a real possibility that a massive defeat looms.

If that happens, we’ll be wondering, what’s the point?

And even if it doesn’t, given the state of the game, we might be wondering about it regardless.